Powering a suburban house using a battery was once considered a far-fetched idea, but for tens of thousands of Australians, it’s now a reality.

Retired engineer Peter Youll tried it – and has been delighted by the results. Now he powers not only his entire household off a battery that hangs out of the way on a wall in his garage, but also his new electric car.

“Once we installed the battery, our electricity bills went down to nothing,” he says. “We now produce and store much more power than we can possibly use.” 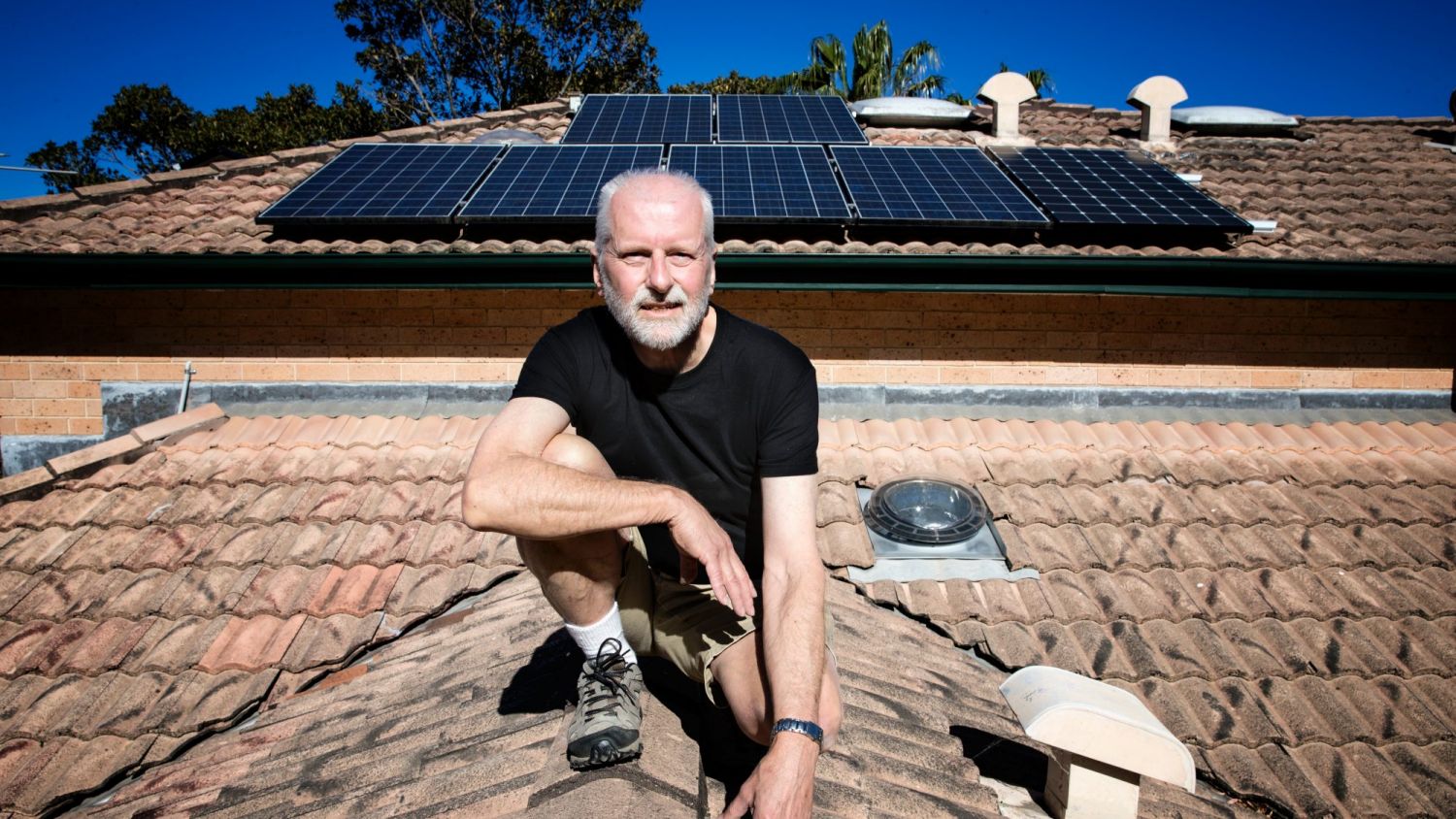 Mr Youll has 20 solar panels powering his home. Photo: Louie Douvis  “It’s very satisfying in terms of being able to give the finger to your electricity retailer but the main reason I did it was that we have five grandchildren and I don’t want to make their lives any worse than it might otherwise be with climate change. I don’t want to feel guilty!”Mr Youll, 69, installed his first six solar panels on the roof of his Sydney home in North Epping back in 2010, and put on 14 more early in 2017.Then, in July, he ordered and had installed a 1.5-metre by 1-metre battery to store the solar power generated. That cost him $10,500 – a sum he predicted he’ll more than make up by the end of the warranty period.He’s now also planning to replace his gas water-heating system and gas cooktop – although that will mean changing the saucepans he and wife Anne received as a wedding present 44 years ago.The only thing he won’t convert to solar electricity is his gas-bottle barbecue. “It’s those flames and smoke and smell that makes the barbecue attractive!” he protests.Batteries on the riseMr Youll is one of a vast number of Australians now installing batteries to go with their solar panels, or actively considering buying both, to produce clean energy that can be used around the clock and cut their power bills.A report in February from Energy Consumers Australia found that more people are dissatisfied with value for money in electricity than for insurance or banking, despite the royal commission.Batteries allow householders to capture the solar energy being generated from panels so they can save it for their own usage after the sun’s gone down, or use it at peak periods during the evening when costs are higher. They can also act as a buffer for any future outages.They work by using a chemical process to store electrical energy and can either be DC-coupled to integrate into a solar system or can be AC-coupled, separate from the panels, that connects into the house’s power system.There are currently nearly two million rooftop solar systems on Australian homes but there are still well under 50,000 batteries installed to store the power produced, according to James Martin, spokesperson for comparison and advice service Solar Choice.“Last year there were about 20,000 battery systems installed, according to consultants Sunwiz, and we’re anticipating this year there will be about twice that,” he says. “There’s a lot more interest since Tesla entered the market with a home battery product which raised the awareness level, as well as factors like high electricity prices, cheap solar and low feed-in tariffs – the amount companies will pay for excess power fed back into the grid.”

What does it cost?

While a typical 5kw solar system with panels, an inverter, cables and wires will cost $4000-$6500, a standard 5kwh battery, which will meet most evening needs for a home throughout the year, will cost between $5000 and $10,000 with installation.It will usually be the size of a bar fridge, contain several different batteries within the casing and will have a warranty of up to 10 years.The only limitations on homes installing both will be energy companies’ rules on inverter capacity and exports of electricity, says Mr Martin. “And obviously you do need unshaded roof space,” he adds.Latest research on global renewables contained in the REN21 Global Futures Report found that 40 per cent of the new solar systems being installed in Australia last year also incorporated battery storage.“When people are doing it now, they are much more often including battery systems too so they can absolutely maximise the use of solar and minimise Australia’s notoriously high grid electricity prices,” says Petra Stock, The Climate Council’s senior climate and energy solutions analyst.“It’s very exciting that they’re seeing battery storage now as a huge opportunity. It means you can store energy during the day when everyone’s at work, and then use it when everyone gets home to switch on the lights, cook dinner and warm the house.”“And while we’ve already seen solar prices come down dramatically, we’re now seeing battery technology flowing down the same path.”How long it would take a family to recoup the cost of the solar and battery system would depend largely on where they live, the size of their system and the amount of electricity they use.“Generally you would expect the system would pay for itself within five to 10 years, and from that point on, it’s all savings,” Ms Stock says.  (article from: https://www.domain.com.au/advice/how-the-battery-boom-is-empowering-thousands-of-home-owners-to-say-goodbye-to-skyrocketing-power-bills-20180607-h114nw/)